"A shocking, stomach-churning, enraging narrative history that should be required reading for anyone still unconvinced of the need for total demilitarisation in Northern Ireland."
- Irish Independent

"What really happened on Bloody Sunday"
- The Times

"A gripping account ... taut, pacy and in easy command of a complexity of facts ... devastating."
- Sunday Tribune

"Peter Pringle and Philip Jacobson, two reporters of skill and firsthand knowledge, have untangled the conflicts of evidence with impressive objectivity, and at the same time given us an absobing narrative of tragedy."
- Harold Evans, author of The American Century 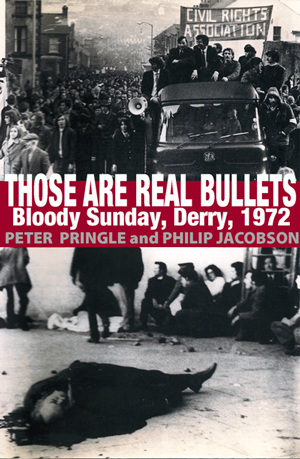 At dusk on January 30, 1972, Barney McGuigan lay on the pavement in a pool of his own blood and brains, his head blown open by a paratrooper's bullet. Peggy Deery was near death in the hospital, the back of her leg torn away. Frantic relatives searched the morgue for their loved ones.

On that day, known ever since as Bloody Sunday, British paratroopers opened fire on unarmed Irish Catholic demonstrators in Derry, killing thirteen and wounding another fourteen. Five were shot in the back. A crucial turning point in the recent history of Northern Ireland, the killings galvanized Catholics in their struggle against the British presence in Ulster. A formal inquiry immediately after Bloody Sunday exonerated the British soldiers, despite hundreds of eyewitness accounts that none of the victims was armed, and left many questions unanswered. Now, for the first time, here is the definitive account of what actually happened on that day.