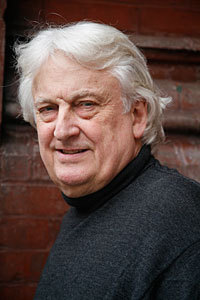 I have spoken about the following topics:

1. The science and business of food, agriculture, plants, seeds and biodiversity [Food Inc]
2. Food, Patents and innovation [Day of the Dandelion]
3. Russia, Stalin and food [The Murder of Nikolai Vavilov].
4. Northern Ireland [Those are Real Bullets: Bloody Sunday, 1972.]
5. Writing and Investigative Reporting: Pringle has thirty years experience as a foreign correspondent and investigative reporter

For thirty years he was a foreign correspondent for The Sunday Times, The Observer and The Independent, working in Europe, Africa, the Middle East, the former Soviet Union and the United States.

He has also written for several U.S. newspapers and magazines, including The New York Times, The Washington Post, The Atlantic, The New Republic and The Nation.

Books: He is the author and co-author of several books on science and current affairs including: Insight on the Middle East War, Andre Deutsch, London 1974; Insight on Portugal, Andre Deutsch, London, 1975; The Nuclear Barons, Holt, Rinehart & Winston, New York, 1981 (with translations into French, German and Japanese); Chernobyl, Pan Books, London, 1986. Cornered: Big Tobacco at the Bar of Justice, Henry Holt, New York 1998. He was a contributor to Crimes of War: What the Public Should Know, Norton 1999.

His best-selling history of Bloody Sunday, Derry, January 30, 1972, was published by Fourth Estate, London 2000, and Grove Atlantic, New York, 2001. His book about biotech agriculture, Food Inc., Simon & Schuster, 2003, was a New York Times and American Library Association Notable Book of the Year. The New York Times Book Review said it was a “feast of honest reporting and serious thought.” His most recent book is a biography of Nikolai Vavilov , the Russian geneticist. Nature called it “…[A] timely reminder that public policies must be based on rational decisions drawn from the best data available.” The New York Review of Books said it was “A revealing account of Vavilov’s remarkable career and brutal downfall…Original and important.”

Awards. In 2001, Peter Pringle was the recipient of a Rockefeller Foundation research and writing grant. In 2004, he was awarded a research grant by the Alfred P. Sloan Foundation for his biography of Nikolai Vavilov.