"Pringle, former Moscow bureau chief for the Independent, offers a well-researched and well-written study of the murder of an outstanding Soviet geneticist and the ideological perversion of science."
- Publishers Weekly

"Nikolai Vavilov was in many ways the greatest and most courageous of the early Soviet geneticists who came under murderous attack by a quack, Trofim Lysenko, and his patron Joseph Stalin. Drawing expertly on archival sources and interviews, Peter Pringle provides a gripping account of Vavilov's brilliant rise and subsequent destruction."
- Matthew Meselson, Professor of Molecular Biology, Harvard University

"This exciting and brilliantly written story about a great scientist is long overdue. Vavilov tried to launch a revolution in global agriculture three decades before America's so-called 'green revolution.' His extraordinary life, so full of adventures and brave expeditions, and his struggle for the survival of genetics in the Soviet Union make this book read like a thriller."
- Zhores Medvedev, author of The Rise and Fall of T. D. Lysenko, Soviet Science, and Soviet Agriculture

"Vividly written...Timely and important...Books such as The Murder of Nikolai Vavilov are becoming crucial for remembering Stalin's victims."
- Nature Genetics

"A revealing account of Vavilov's remarkable career and brutal downfall.... Original and important.... Pringle's account of the brutal politics of Lysenko's campaign against Vavilov is gripping."
- Daniel J. Kevles, The New York Review of Books

"Seldom has the beauty of truth, and the evil of falsehood been more starkly told than in the chilling tragedy that Peter Pringle has written."
- Matt Ridley, author of Genome

"It's sometimes easy to forget that the Bolshevik Revolution left more than physical damage in its wake: It also destroyed culture, literature, art and science in ways that are not always simple to catalogue, to count or even to explain...Lenin was personally interested in Vavilov's seed collection [but] that brief moment of enthusiasm quickly waned, as Peter Pringle, a longtime Russia-watcher, demonstrates very well."
- Anne Applebaum, author of Gulag: A History 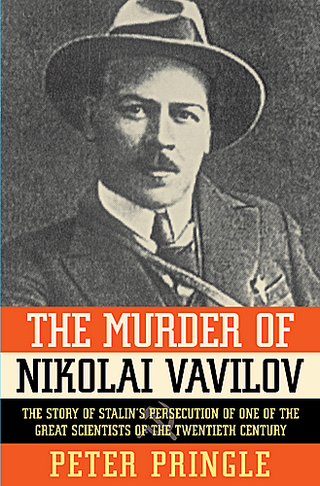 In The Murder of Nikolai Vavilov, acclaimed journalist and author Peter Pringle recreates the extraordinary life and tragic end of one of the great scientists of the twentieth century.

In a drama of love, revolution, and war that rivals Pasternak's Dr. Zhivago, Pringle tells the story of a young Russian scientist, Nikolai Vavilov, who had a dream of ending hunger and famine in the world. Vavilov's plan would use the emerging science of genetics to breed super plants that could grow anywhere, in any climate, in sandy deserts and freezing tundra, in drought and flood. He would launch botanical expeditions to find these vanishing genes, overlooked by early farmers ignorant of Mendel's laws of heredity. He called it a "mission for all humanity."